Healthy eating, mindful eating is a rising trend in the world as more and more consumers are focusing on adopting healthy eating patterns by incorporating in their diet the foods that boost their body strength. One of the longer sustained trends is being environmentally aware and an ever-increasing shift towards vegetarianism and veganism by consumers for their daily protein needs.

As consumers become more conscious of the source of protein as it has a direct effect on their health and wellness, they opt for an alternative source of proteins than animal protein, which is plant-based protein.

Proteins are made of amino acids, playing critical biological functions in our body. Out of 20 amino acids required by the body, 9 have to be obtained through diet. They are called essential amino acids.

Majority of cultures and societies became dependent on animal sources of protein including meat, poultry, etc., which contain an adequate amount of these essential proteins and are called complete protein. As opposed to it, plant-based proteins are considered as ‘incomplete’ protein as they contain lesser amount or lack some of these essential amino acids.

But as against the popular perception, it doesn’t signify that you will be devoid of complete protein if you follow a plant-based diet. Some plant-based sources are complete protein sources such as quinoa, soy and buckwheat whereas others such as whole grains, legumes, vegetables, nuts and seeds if consumed in variety on a regular basis provide sufficient amount of protein required by the body.

A healthy and balanced diet encompassing a variety of plant-based food not only fulfills our protein requirements but also provide us with necessary vitamins, minerals, fibres, antioxidants, etc.

The Daily Value (DV) for protein is 50 gm; sneak into the broad categorization of plant-based foods you can derive it from: 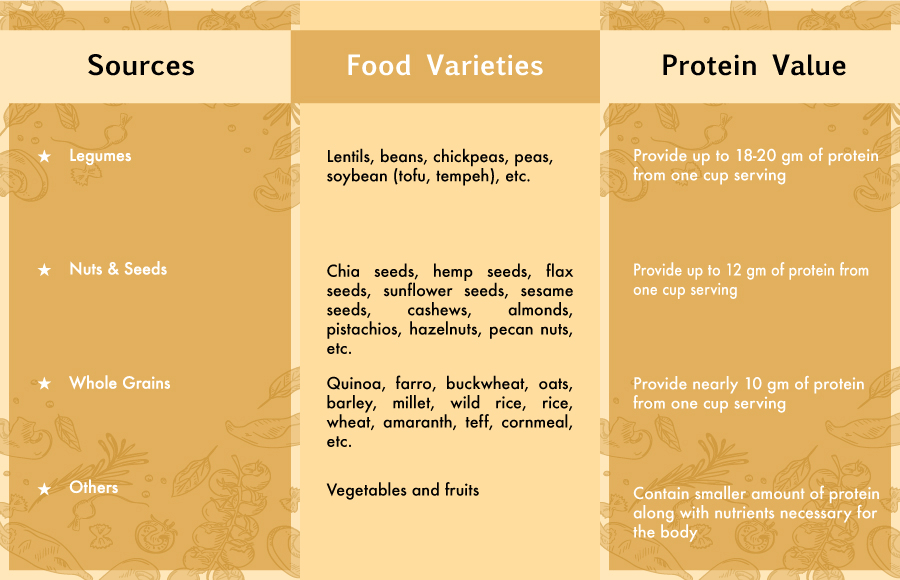 The popularity of a meatless diet is accelerating globally so much that researchers propose Veganism may go mainstream in 2019.

In 2018, the UK launched the highest number of new vegan products in the world, according to Mintel Global New Products Database (GNPD).

In America, nearly 25% of the population from the age group of 25-34 follow veganism or vegetarianism as per The Economist.

According to research from Dalhousie University, there are 2.3 million vegetarians and 0.85 million vegans in Canada (making a total of 9.4% of the Canadian population).

Basis of the research by Roy Morgan, there are nearly 2.5 million Australians (12.1% of the population) following a plant-based diet.

As per the report by Handelsblatt Global, the vegan population of Germany has doubled and only 21% of Germans consume meat every day as of Jan 2018.

According to Euromonitor, the sales of China’s vegan food market is expected to grow by more than 17% from 2015 to 2020.

The argument by alternate choice makers is that the meat-based food system requires more energy, land, and water resources than the plant-based diet. Besides this, of course, many researches are now pointing at the health benefits of plants while emphasizing upon its ‘effects’ on our biological system. In this limited sense, the vegan diet is more sustainable for such consumers.

This website uses cookies to improve your experience while you navigate through the website. Out of these, the cookies that are categorized as necessary are stored on your browser as they are essential for the working of basic functionalities of the website. We also use third-party cookies that help us analyze and understand how you use this website. These cookies will be stored in your browser only with your consent. You also have the option to opt-out of these cookies. But opting out of some of these cookies may affect your browsing experience.
Necessary Always Enabled

Any cookies that may not be particularly necessary for the website to function and is used specifically to collect user personal data via analytics, ads, other embedded contents are termed as non-necessary cookies. It is mandatory to procure user consent prior to running these cookies on your website.